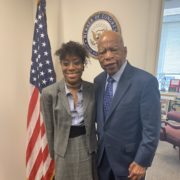 Staffers entered the office buzzing and brimming with anticipation. The seating area was filled with people awaiting their meetings with Congressman John Lewis (D), the representative for the 5th Congressional District in Atlanta, Georgia, who’s known for being one of the most famous and courageous people within the Civil Rights Movement.

Daniel Rosebud and I were scheduled to have a meeting at 10:00 am with Mr. Lewis, and, as Mr. Lewis finished his other meetings we were able to sit down. Our meeting reflected around informing him of the work that we do in Atlanta with United Way, Opportunity Youth United and the Reconnecting Youth Campaign: Unleashing Limitless Potential. Daniel highlighted our association with United Way and how we have done many events within the Atlanta area and in District 6. We were excited to be sitting there and to have the chance to advocate for opportunity. Shanice Turner, a member of OYUnited’s National Council of Young Leaders, met with Representative John Lewis as part of the Reconnecting Youth Campaign.

During the meeting, I was able to speak with John Lewis about my grandfather Eddie Mack Turner and share a story about how he had marched—with a cane and a limp—with Fred Grey and Andrew Moore, the people who had introduced Lewis to Martin Luther King in the beginning of the Civil Rights Movement. I never met my grandfather because he died one day before I was born, so being able to tell this story to Mr. Lewis felt like a victory. To make it even more special, the day we met was my Dad’s birthday.

Even though the morning seemed rushed, people were buzzing, and time is always short, John Lewis showed no need to follow suit. When we first entered the room to sit down, he was calm, cool, collected. We pause to greet him, and he seemed to slow the room down specifically to talk to us.

He told us that he knows and supports YouthBuild, along with Job Corps. In 2017 and 2018, John Lewis helped to support YouthBuild by working together with many of his fellow Members of Congress to reverse proposed budget cuts and actually increase federal funding.

He took special note of the challenges we have faced in carrying our messages to Capitol Hill. He said he has always been a champion and ambassador for our cause, and he and his staff remain committed. His enthusiasm and passion for our issues was clear.

It felt amazing to be able to highlight the work with Opportunity Youth, explain what a CAT (Community Action Team) is, and talk about why we need his continuous support for the Reconnecting Youth Campaign, specifically, to invest in 1 million pathways to education, national service and job training for Opportunity Youth.

During this visit with John Lewis, however, it was clear that supporting us was not simply a signature on a document for him. He made it clear that he truly cares about providing support as our advocate, ambassador and champion. His staffers also seemed onboard with the goals of OYUnited and the Reconnecting Youth Campaign. It seemed like it really mattered to them.

I stood before John Lewis, taking my stance to increase federal dollars and opportunities for young people. I stood as my grandfather marched, protested, went to jail for equal rights and freedom for African Americans.

Being on Capitol Hill and talking with John Lewis was such an honor. I stood before John Lewis, taking my stance to increase federal dollars and opportunities for young people. I stood as my grandfather marched, protested, went to jail for equal rights and freedom for African Americans.

Even now, as I picture myself standing there, hearing John Lewis’ affirmation of the work that I am doing, it feels like I am continuing my grandfather’s work and legacy and in many ways, walking in his footsteps.

Shanice Turner is a member of the National Council of Young Leaders and a founding member of Opportunity Youth United. She lives in Atlanta, Georgia where she serves as grants manager and writer for Gate City Day Nursery. Shanice is equally passionate about child advocacy and creative pursuits like acting and voiceover work. More from Shanice (including video).

“With unemployment at record lows, American companies are looking for new ways to find and hire great talent. Meanwhile, there are more than 4.5 million young people in America who are out of school and unemployed—or roughly one in nine youth who are disconnected from our economy.”